Each unhappy genius is unhappy in his own way.

Drones and the dangers of risk-free war.

A soap opera with a British accent. That's the critical rap on Downton Abbey, the cross-Atlantic hit series which in January returned to PBS for its third season. by Algis Valiunas
Each unhappy genius is unhappy in his own way. by Alan W. Dowd
Drones and the dangers of risk-free war. 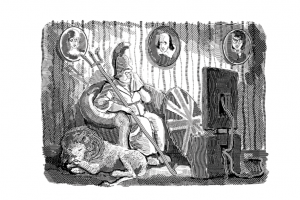 by Cheryl Miller
A soap opera with a British accent. That's the critical rap on Downton Abbey, the cross-Atlantic hit series which in January returned to PBS for its third season. by Christopher Caldwell
A review of From the Closet to the Altar: Courts, Backlash, and the Struggle for Same-Sex Marriage, by Michael J. Klarman Of Experts and Angels

by Joseph Postell
A review of Design for Liberty: Private Property, Public Administration, and the Rule of Law, by Richard A. Epstein by Ryan P. Williams
A review of William Howard Taft: The Travails of a Progressive Conservative, by Jonathan Lurie by Benjamin Balint
A review of Joseph Anton: A Memoir, by Salman Rushdie Wisdom of the Ages

by Michael M. Uhlmann
A review of The Fortunes of Permanence: Culture and Anarchy in an Age of Amnesia, by Roger Kimball by Michael Burlingame
A review of Fateful Lightning: A New History of the Civil War and Reconstruction, by Allen C. Guelzo and This Great Struggle: America's Civil War, by Steven E. Woodworth Why I’m Still a Democrat

by John J. DiIulio, Jr.
A review of Spoiled Rotten: How the Politics of Patronage Corrupted the Once Noble Democratic Party and Now Threatens the American Republic, by Jay Cost by James Hankins
A review of The Unintended Reformation: How a Religious Revolution Secularized Society, by Brad S. Gregory The Buddy of Christ

by Naomi Schaefer Riley
A review of The Juvenilization of American Christianity, by Thomas E. Bergler by Michael Ledeen
A review of Good Italy, Bad Italy: Why Italy Must Conquer Its Demons to Face the Future, by Bill Emmott by David F. Forte
A review of Reading Law: The Interpretation of Legal Texts, by Antonin Scalia and Bryan A. Garner by Martha Bayles
Lincoln and Django Unchained represent what passes for artistic sensibility in todayâ€™s Hollywood.