The divorce between faith and reason remains a troubling phenomenon within Christian nations of the West.

Reason, Faith, and the Struggle for Western Civilization

When Pope Benedict XVI gave his 2006 speech in Regensburg, Germany, “Faith, Reason, and the University,” it met with swift condemnation throughout the Muslim world. The discussion of this rich, sophisticated lecture got sidetracked by his use of a peripheral example from 14th-century Byzantium, in which Emperor Manuel II Palaeologus rebuked a Muslim interlocutor over violence’s improper use in religion. The predictable reactions in Muslim communities from Somalia to the Far East culminated in the murder of an Italian nun and her driver—ironically confirming one of the pope’s points.

Although it touched on differences between Allah as a God of Will and the Judeo-Christian Deity as a God of Logos, Benedict’s address was not primarily aimed at Christian-Muslim relations. Rather, his concern was with a Truth that encompasses both Faith and Reason. Benedict was trying to underscore a troubling phenomenon within Christian or formerly Christian nations of the West: the divorce between faith and reason, prominent since the Enlightenment, though the break goes back to a lesser degree at least to the late Middle Ages.

Samuel Gregg, Acton Institute research director and current president of the Philadelphia Society, begins his illuminating new book, Reason, Faith, and the Struggle for Western Civilization, with Benedict’s formulation of this phenomenon and its implications for our civilization. The most common Enlightenment model, Gregg writes, sharply reduces reason’s potential range by giving it a flat, positivist character. In its extreme form, this model denies the very possibility of philosophy and assumes scientific knowledge is the only form of truth. For Enlightenment devotees, Judaism and Christianity simply cannot be constituted by revelations addressed to reason (which remind reason of its limits and of truths that exceed, but do not contradict, it). Instead, irrational religion, in poet Matthew Arnold’s formulation, is merely “morality tinged with emotion”—subjective feelings without relation to truth. Taking us through Benedict’s Regensburg Address, Gregg outlines how this Enlightenment model led to Western “pathologies” of both faith and reason.

It’s a commonplace of intellectual history that the Jewish and classical Greek cultures were fruitfully synthesized in early Christianity. The Old Testament had been translated into Greek by the first century B.C. precisely so it could be read by people formed in the then-dominant Greco-Roman culture, including diaspora Jews who spoke neither Hebrew nor Aramaic. Much the same impulse lay behind the formation of the New Testament in koine Greek, which made it possible for Christian texts to be understood all over the ancient world. Still further translations into other languages, Gregg shows, involved transposing Greek terms into new contexts, enlarging their meanings in ways that became central to the West’s self-definition.

Gregg highlights three main outcomes of this interaction. First, monotheism did away with capricious pagan gods and goddesses (who had already come under sharp criticism by Plato and Aristotle) and replaced them with a rational and creative Deity. Second, the new Bible-infused culture saw every person as made in the divine image and likeness, capable of knowing the truth about God, the world, and man—unlike classical culture, which thought truth the preserve of, at most, a few philosophers. These two outcomes led to a third: freedom. Humans could choose to follow the truth, or not—but had been given freedom for something, which meant seeking “inner liberty” from mere instincts in addition to outer, political liberty.

This major revolution in human consciousness, Gregg argues, made “Western Civilization” what it is. Tragically, this legacy came to be taken for granted—something every rational person was simply assumed to know. Indeed, prominent 17th- and 18th-century figures thought we could trust in our civilization while dismissing Biblical religion as a foolish mythology. For every Johannes Kepler or Isaac Newton or Gottfried Leibniz—stout reasoners who believed God made an intelligible universe—there arose multiple Voltaires and David Humes, who saw only social oppression and intellectual imposture in the West’s spiritual foundations.

The standard historiography holds that a shift in emphasis regarding our understanding of rationality led to the Scientific Revolution and the resulting technologies that have improved our lives. But various nasty consequences accompanied that shift. For example, though there had always been a sordid underbelly of anti-Semitism in Christianity, the new “rationality” gave it a philosophical cast. A figure like Edward Gibbon, who idolized ancient Rome—despite its cruel public games, imperialism, and absurd pantheon—mocked the Jews, whose “sullen obstinacy” derived from “a stronger and more ready assent to the traditions of their remote ancestors than to the evidence of their own senses.” Still worse, he lamented, “[a] single people refused to join in the common intercourse of mankind.”

That all-too-human common intercourse, like Gibbon’s argument that Christianity led to Rome’s fall, doesn’t hold much water today. Abandoning Biblical “mythology,” argues Gregg, resulted not only in the French Revolution’s Terror, but subsequent anti-Western ideologies such as Communism and National Socialism—just a few of the “pathologies of reason” stemming from the West’s divorce from religious principles.

We’ve seen better balances between reason and revelation, for example, in the religious toleration of 17th-century England and the 18th- and early 19th-century Scottish Enlightenment. The American Founding provides the most conspicuous example: against European revolutionaries, the Declaration of Independence affirmed that pre-modern truths about human freedom could live peacefully alongside modern versions of rights—indeed provided their very foundation.

Discarding reasonable religion allows Promethean forms of reason to take hold, aimed at the remolding of human persons in the name of “progress.” Several such brave experiments have gone decidedly wrong. Gregg points to the many disasters that followed, for example, various efforts by intellectuals to abolish private property, as if that would likewise abolish poverty of soul and body. Enlightened intellectuals have repeatedly fallen prey to a blind faith in their capacity to “progress,” and their desire to curtail the freedom of those who hold different views of human goods.

Is there any way back from where we are? Gregg invokes Edmund Burke to guide us, but not the Burke commonly presented: opponent of everything “Enlightenment.” Instead, in Gregg’s reading, Burke was a clear-minded conservative who understood that history leads us to believe that “Certain long-standing institutions do, it seems, reflect unchanging truths about human nature.” But at the same time Burke was willing to allow some of the things the Enlightenment rightly claimed could be changed in pursuit of legitimate and achievable improvements.

Gregg calls that interweaving of truths a “delicate tapestry”—one always in danger of unraveling if various strands are withdrawn. The multifaceted tradition of the Logos—Western civilization’s central affirmation—shows itself to us as “a more plausible position than assertions that all is flux or that everything begins in nothingness [and] is crucial for preserving the West’s civilizational achievements from the rule and consequences of irrationality.” The hour is late and the battlefield dark. But Samuel Gregg’s own delicately woven tapestry is an extremely helpful, hopeful, and sophisticated guide to what must happen if we are to save ourselves from cultural extinction. This valuable, civilized book, in both its defenses and criticisms of our culture, embodies the very best of the West.

Robert Royal is president of the Faith & Reason Institute.

by Charles R. Kesler
How much liberty are Americans prepared to renounce, or defer, in this moment? 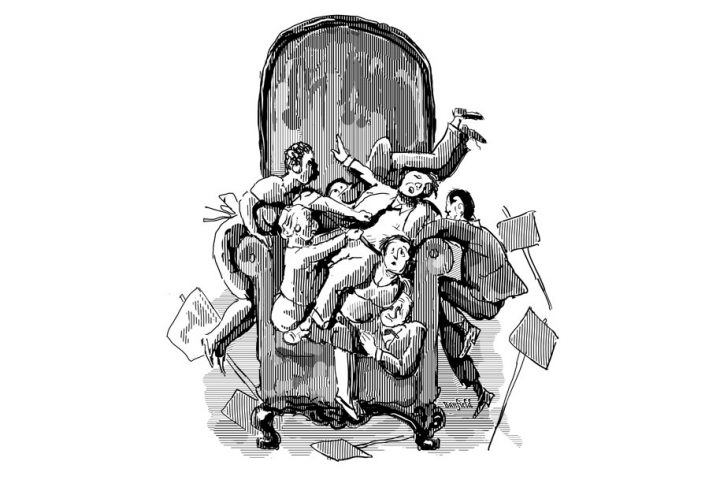 by William Voegeli
Not all majorities are created equal.

by Mark Helprin
The lesson of this pandemic is prudence; we have not been prudent.
View this issue