Spring 2022 From the Editor's Desk

The overturning of Roe v. Wade will intensify the battle between the progressives’ constitution and the founders’ Constitution.

Lenin allegedly said, “There are decades when nothing happens, and there are weeks when decades happen.” He was supposedly discussing the Bolshevik Revolution, but the saying could be applied to America’s growing turmoil at home, too. After almost a half century of Sitzkrieg in the abortion wars, the recent leak from the Supreme Court suggests that within a month or two a major legal breakthrough may occur. The lines long established by Roe v. Wade in 1973 may be penetrated and overthrown.

Just how much of a revolution this will be remains to be seen. Justice Alito’s draft opinion would strike down Roe’s nationwide regime of permissive abortion rules but, rather than erecting a contrary regime, would basically return the question to regulation by the states. The abortion lobby will insist that resurgent federalism is a new and contrary regime. For five decades American abortion “law” has been set by the Supreme Court. The people’s representatives had almost nothing to do with it. The idea that the people of each state, making their own laws and constitutional arrangements, might choose their own abortion statutes is a breath of fresh democratic air and might even be called revolutionary, had not state governments been preparing for this moment for years—states like Utah and Mississippi to tighten their restrictions, California and New York to loosen them in order to become abortion sanctuaries.

Liberals believe, somewhat quaintly, that they command the moral high ground in American politics. They define that high ground as a series of ever-expanding doctrines of rights, designed to liberate minority groups whom they consider unpopular and oppressed, most recently, for example, the transgendered. (But not high-scoring Asian-American students, whom they seem to consider oppressive, not oppressed, and thus rightly unpopular.) The right to abortion liberals consider the holiest of holies, because this is both a socio-economic and an identity right, spanning racial and ethnic minorities, the poor, women, and especially white, single women, a key constituency. Is it only a matter of time before transgender abortions become the rage?

There is something, too, about the very unnaturalness of abortion that is attractive, particularly when celebrated as a right, of which recipients ought to be proud. It was 30 years ago when liberals like Bill Clinton took the demure position that abortion is basically a necessary evil that should be safe, legal, and rare. Neither he nor any other recent Democratic president would dare now to take that position.

The rights revolutions of the past half century were mostly secured by liberal judges, handing down what they hailed as epic decisions, and by helpful bureaucrats, writing and applying regulations based on those holdings. Those epic opinions were often a muddle—none more so than Roe v. Wade, as even its candid supporters admitted. “It’s a very bad decision,” wrote John Hart Ely, a Yale Law professor and former clerk to Chief Justice Warren, “because it is not constitutional law and gives almost no sense of an obligation to try to be.” Ruth Bader Ginsburg, who in the 1970s led the ACLU’s Women’s Rights Project, supported the holding but criticized the opinion for the rest of her life: it went too far. In the draft opinion smuggled out of the Court this week, Alito pronounced nothing controversial when he noted that Roe’s “reasoning was exceptionally weak.” Paradoxically, its very weakness as legal doctrine encouraged a fanatical political devotion to it.

Our new-fangled rights grow by means of what Robert Higgs, in a different context, called a “one-way ratchet.” Often in response to some crisis or scandal, our “rights” enlarge but never recede to the pre-crisis level. Ever upward is the only path liberal government permits, which is why the repeal of Roe would be devastating. “Our democracy,” as they call it, depends not only on never turning back the clock of social reform, but never even admitting such a thing is possible. Even if, as is likely, almost half the states would enact abortion regimes as permissive as, or even more permissive than, the current one, the game would be up. The nature of such modern rights would be exposed, unforgettably. It would be, as the liberals fear, a kind of revolution.

Which is why they have little choice but to object not merely to the leaked decision and the brave justices who support it, but to the whole system. To President Trump, who appointed three of those justices but never was “fairly” elected with a popular, non-Russian majority vote. To the Senate, which embraces minority rule through the filibuster and equal representation of the states. To the Constitution, systemically racist among other evils. Prepare for decades to happen in the next year or so of our politics, as the battle between the progressives’ constitution and the founders’ Constitution intensifies. 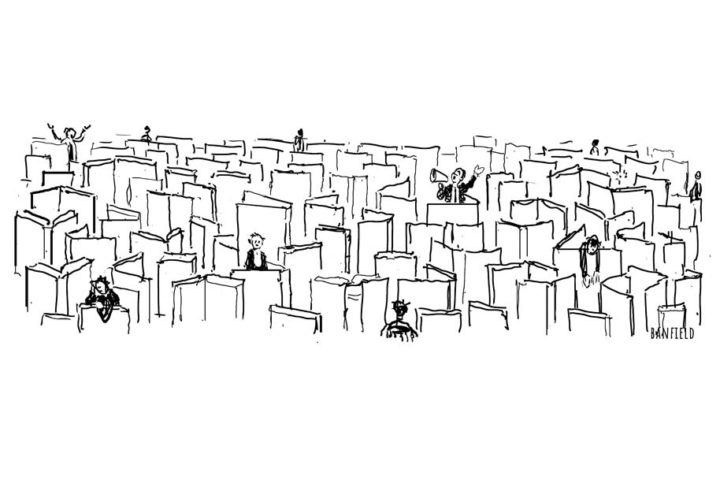 by Martha Bayles
The ghost of Neville Chamberlain.
View this issue