The right to property is the key to preserving limited republican government.

Property and the Pursuit of Happiness: Locke, the Declaration of Independence, Madison, and the Challenge of the Administrative State

Now professor emeritus of political science at California State University, San Bernardino,Erler shows that the American Founders regarded the Declaration of Independence as “the authoritative source of the principles of the Constitution,” and focuses on how the founders understood the right to property, expressed in the Declaration as “the pursuit of happiness.” Today this right is poorly understood and often singled out as the source of modern man’s decline into shallow egoism. Erler argues, however, that the founders’ right to property included not only material goods but spiritual possessions—among them life, liberty, and conscience. Thus understood, the right to property is the comprehensive human right encompassing all others. It is the key to preserving limited republican government, and defending it is a moral duty.

Although the American Revolution established a radical break with the past, its principles were not wholly modern. Erler contends that the Declaration clearly displays the influence of Aristotle. In true Aristotelian fashion, the rights secured by the Declaration are not ends in themselves but means to a still higher purpose: the “safety and happiness” of the American people. The right to property is thus the bedrock of the American regime because it enables the pursuit of that happiness.

Given this connection between ancient Greek thought and the American Founding, it may at first seem counterintuitive that Erler traces the principles of the Declaration to a quintessentially modern thinker, John Locke. Locke is not much in favor today: many on both the Left and the Right agree with the 19th-century philosopher Friedrich Schelling, who proclaimed contemptuously, “I despise Locke.” Locke is often disdainfully dismissed as a depthless, second-rate philosopher, or else he is vilified as the nefarious mastermind of radical modernity. As a result, even some who defend the American Founding have attempted to downplay Locke’s influence on it.

Erler takes the opposite approach. He offers an unabashed defense of America’s Lockean first principles, arguing that Locke is justly designated “America’s philosopher” and was not a proto-radical who rejected antiquity out of hand. That, in any case, is certainly not how the founders viewed him. As practical statesmen, they sought instruction from what Jefferson called the “elementary books of public right,” including “Aristotle, Cicero, Locke, Sidney, &c.” From this common-sense perspective, Locke was an important link in an unbroken chain that began with classical political philosophy and culminated in the American Founding. In fact, Erler shows that many of the Aristotelian arguments embraced by the founders probably came to them “at a distance” through Locke.

This understanding of Locke only makes sense if one appreciates the unique theological and political predicament he faced in his day. To the reformers who helped shape Anglo-American thought in the 16th and 17th centuries, a citizen’s political obligations were to be distinguished from his religious duties. Salvation depended on developing a personal relationship with God, which preceded all other obligations in importance. The edicts of heaven, as privately understood by an individual’s conscience, were to take precedence over human law. This was a basis for civil disobedience, meaning that theological disputes inevitably became a source of political conflict. Locke was born into a world plagued by religious war and strife. It was a radically new environment which required Aristotelian natural right to take a different form.

Perhaps no one understood this problem better than Harry Jaffa, who argued—somewhat against his own teacher, Leo Strauss—that Locke’s solution was consistent with an Aristotelian understanding of natural right. Nevertheless, I daresay no one before Erler has so thoroughly and comprehensively shown how Locke’s theological, epistemological, moral, and political teachings came together to solve the theological-political predicament. Locke, Erler argues, found a ground for political obligation independent of Christian theology in a universally valid law of nature. According to this law, the social compact allows for the creation of particular political communities. Lockean natural law theory thus restored the Aristotelian concept of man as a political animal, which had been obscured by the Christian teaching that all men are citizens of an apolitical heavenly kingdom.

Lockean social compact theory enjoined citizens to carry out their duties to the state and to subordinate themselves to natural law, while simultaneously removing sectarian religious questions from the political process. It was common for New England clergy to preach that though politics and religion were separate spheres, reason and revelation remained in complete agreement about morality and civic duty. Erler’s analysis of sermons from before and during the founding era shows that the social compact was both an “established political principle” and an “accepted theological precept” for Americans of the time. Public virtue and private happiness thus remained as inextricably linked for the first Americans as they had been for the ancients.

The idea that social compact theory might have preserved any connection to traditional moral philosophy and theology is controversial. It is often argued that the Declaration strictly limits the purpose of government to securing rights. If so, then America made a clean break from the classical tradition by removing questions of virtue and morality from the purview of government. The Declaration, however, asserts that facilitating the “safety and happiness” of the American people is government’s principal purpose.

But were these Lockean foundations doomed to crumble? Did Locke’s covert agenda ultimately undermine the intentions of the founders and preordain America’s moral and cultural decline? It is often argued that Locke considered the pursuit of happiness purely subjective or idiosyncratic, as did his older contemporary, Thomas Hobbes. But Erler presents strong evidence that Locke was not a “rank hedonist” and that his references to “the pursuit of happiness” implied a genuine summum bonum. Erler skillfully criticizes the arguments of scholars such as Harvey Mansfield, Michael Zuckert, Thomas Pangle, and Steven B. Smith, who see the American Founding as a radically modern enterprise informed by a Hobbesian Locke.

To be sure, the Declaration is not simply a restatement of Locke’s Second Treatise of Government. It goes beyond the ideas of any single thinker in order to offer, as Jefferson said, “an expression of the American mind.” Erler provides an enlightening analysis of important ways in which the founders, Madison in particular, modified and improved Locke’s theories. For Locke, property included “life, Liberty and Estate.” But it was Madison who articulated the quintessentially American notion that property includes what Erler describes as “a range of attributes that we might call the goods of the soul.” In his 1792 essay on the subject, Madison noted that property should not be understood narrowly as “that dominion which one man claims and exercises over the external things of the world, in exclusion of every other individual.” This was the definition of property proposed by the British jurist William Blackstone. But Madison broadened his definition to include “internal things”—including, most importantly, the rights of conscience. “Conscience,” he contended, “is the most sacred of all property.”

Madison also went beyond Locke in his views on the origins of property. Locke believed that labor gives one a claim to property, so that the purpose of government is to protect the product of one’s labor. But in his famous argument from The Federalist, Madison argued that it is “[t]he diversity in the faculties of men, from which the rights of property originate.” Individuals with different mental and physical abilities will produce both different kinds and different amounts of property. Thus the end of government is not simply to protect property itself, but rather to protect each man’s God-given ability to produce such property as his talents allow. As Erler explains:

Throughout, Erler reminds readers that the American Founding was incomplete so long as slavery continued to exist anywhere in the country. The completion of the founding was thus only achieved with adoption of the Reconstruction amendments. Erler shows that Republican members of the 39th Congress who drafted and ratified these amendments were inspired by the idea of completing the American Founding and extending its benefits to all Americans. This towering accomplishment has been undermined by the progressive revolution in America and the emergence of the administrative state.

Despite these challenges, Property and the Pursuit of Happiness does not end in despair. The right to property expressed in the Declaration as “the pursuit of happiness” is, after all, a natural right and a moral obligation. Truth can be forgotten, rejected, or buried but, if it is truth, it can also be recovered. Edward Erler’s remarkable new book should be required reading for all who hope to recover that truth. 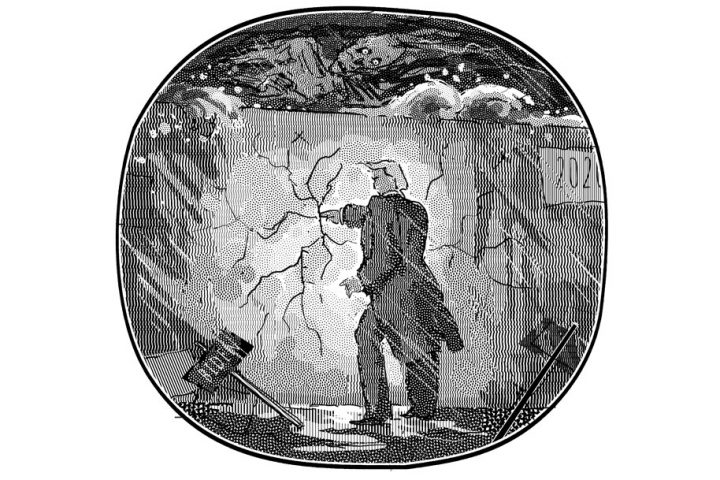