G.K. Chesterton once described America as “a nation with the soul of a church.” That church used to be Protestant. Then it became Judeo-Christian. Today, Social Justice is America’s unofficial state religion. Our public life is suffused with a moral fervor that would make our Puritan ancestors blush.

Mark Mitchell’s Power and Purity: The Unholy Marriage That Spawned America’s Social Justice Warriors is an attempt to explain the psychology of the woke Left. A professor of political science at Patrick Henry College, Mitchell sees in social justice “a toxic combination of the Nietzschean will to power and Puritan moralism, secularized but no less rigorous than its earlier religious instantiation.” In his retelling, transmogrified Puritanism inspires the unyielding moral claims of the woke Left, especially the self-righteous zeal with which they punish dissenters. These moral claims, however, have no firm basis as both God and natural right have long been jettisoned. Wokeness is now a mere assertion of Nietzschean will to power.

Mitchell is most insightful in detecting the Christian echoes one still hears in social justice. “In a society still deeply influenced by Christianity, the role of blameless victim carries special significance, for the blameless victim par excellence is Christ,” he explains. “A Christ-like luster is therefore imparted to the victims, who, blameless and virtuous, are empowered to curse and rage against their oppressors.” But unlike Christianity, wokeness does not forgive. Nor does it offer any hope of salvation. The guilty must be punished in perpetuity for their sins and those of their fathers. “In this desiccated Christianity without Christ, no amount of blood is adequate,” Mitchell writes. “The stain of guilt is never removed.” America’s original sin of slavery is inexpiable.

At times, Mitchell appears to underestimate the seriousness of the woke project. Here, for example, is how he explains transgenderism, the most avant-garde manifestation of wokeness:

It is a lust for power rooted in the principles of Nietzsche but blended with a Puritanical moralism that turns the entire enterprise into a self-righteous crusade. “I can be whoever or whatever I want to be” (the will to power). “And how dare you tell me otherwise?” (moral absolutism).

If only the transgender agenda were limited to indignation! The woke are not just demanding that transsexuals’ chosen identity be recognized, but also that the state pay for their sex changes, that little boys who think they are little girls be prescribed hormone blockers, and that transgenderism be celebrated in museums, textbooks, and movies across the land. Those who question whether someone with a Y chromosome can be a woman must also be fired and punished by the law. Hate speech, we are told, should be criminalized.

Moral absolutism does not do full justice to the phenomenon. Puritans do not need fallen men to recognize their virtue and faith in Christ. Ultimately, the woke mindset combines pathetic insecurity—the gnawing feeling that these cooked-up identities are nonsensical and that certain ways of life are shameful—with an authoritarian urge to silence dissent.

Mitchell is right that for Friedrich Niet-zsche, the “will to power is inseparable from the language of unfettered choice.” But this just shows that the woke Left is not truly Niet-zschean, since the woke mindset is not actually about choice: it is about compliance and control. The woke rallying cry “I can be whoever or whatever I want to be” is tacitly subject to serious qualification. Given the actuarial realities of Social Security and Medicare, Millennials and Zoomers cannot identify as Boomers. Homosexuals who wish to be straight must not, under any circumstances, undergo conversion therapy (the practice is currently banned in the District of Columbia, and it is hard to see why the states will not follow suit). And whites, of course, are emphatically not permitted to identify as black. Caitlyn Jenner is a national hero, Rachel Dolezal a pariah.

Social justice is fundamentally about punishing the guilty. Its driving animus is hatred of the evil oppressor groups. As Mitchell correctly observes, social justice warriors

thirst for the punishment of the unjust. They hear with compassion the cry of the innocent victim. And since there can be no divine justice, for God is dead, they arrogate to themselves the authority to mete out punishment upon those who thwart the ideals of equality and tolerance or who violate the rights of approved victims.

Mitchell’s fundamental claim is that we are dealing with fanatics who ultimately have no basis for their fanaticism. He believes that “the moral demands of the social justice warriors are undermined by their metaphysical skepticism.”

In simpler times, it is true, the great theorists of social justice admitted that their belief in such notions as “justice” was utterly contingent. The moral philosopher Richard Rorty preached solidarity for the marginalized while conceding that his reasons for doing so were arbitrary. Ta-Nehisi Coates, the last great apostle of social justice, is also a nihilist. But neither can properly be labeled a fanatic. Rorty died regretting he had not spent more time reading poetry. And Coates has no hope that America will ever end its war on “black bodies.”

By contrast, the screaming social justice warriors depicted on the cover of Mitchell’s book have no such reservations about the truth of their teachings. They are filled with utopian zeal. They firmly believe that a better world—one free of white supremacy, patriarchy, heteronormativity, and transphobia—is within reach. And while they will occasionally mouth relativistic platitudes to prevent Westerners from imposing their way of life on others (with the exception, of course, of modern medicine, feminism, and gay rights), they are nevertheless sure they are right, especially when it comes to race. They hold the truth: white racism is pure evil and must be eradicated. If pressed to defend such views, these foot soldiers of the revolution would probably appeal to human rights, the march of History, or some vague notion of dignity. They would be incapable of offering a cogent philosophical defense of any of these concepts, but how many citizens can articulate the ground of their most deeply held beliefs? The woke press their moral demands with singular ferocity because of the moral certainty which animates them.

They may, at times, have nagging doubts about the veracity of their narratives. No sane person can truly believe systemic racism is the sole cause of racial disparities in America today. But so says the creed. And so it must be affirmed ever more loudly to drown out dissenting voices.

Whatever its theoretical limitations may be, this mindset holds great appeal for those who have the privilege of being considered marginalized. There has never been a better time or place to be “oppressed” than America in 2021. The oppressed are absolved of any collective responsibility for their actions. Standards are lowered or altogether abolished to ensure they are proportionally represented. Their faux accomplishments are showered with praise. It is no exaggeration to say that America today exists to serve those fortunate enough to be considered oppressed, marginalized, and stigmatized.

What needs to be explained, however, is why progressive whites are going along with this. Why do they enthusiastically support a regime that holds people of their complexion responsible for all that ails America and the world? Why do they promote an ideology that encourages the rest of the country to hate them? Regrettably, Mitchell does not address these questions. The prevailing answer among thoughtful observers of Western decline is white guilt. Interestingly enough, Niet-zsche—the great psychologist of guilt—did not anticipate this phenomenon. But he can help us make sense of it: perhaps white guilt is another instance of progressives hating the Church, but loving its poison.

Nietzsche instead focused on Western self-hatred. Well over a century ago, he heard the “hoarse, groaning, genuine sound of self-contempt” preached by those committed to the “darkening and uglification of Europe.” “The man of ‘modern ideas,’” Nietzsche observed in Beyond Good and Evil, “is immeasurably dissatisfied with himself: that is certain. He suffers—and his vanity wants him to suffer only with others, to feel pity.” And so pity has become “the only religion preached now.”

The cult of pity is alive and well today in the West, however selectively it may be applied (poor whites are left to die of despair). But most progressives are neither racked by guilt nor filled with self-hatred. Such pathologies, though present among some college students and activists, are rarely found among the elites. Sure, they feel bad when they think about what America did and continues to do to black people. Sure, they mouth the slogans and put up the lawn signs. But their conscience is not tormented by a crushing sense of guilt. They sleep well at night in their gated communities.

Our progressive elites also do not hate themselves (however much they should). Like Nietzsche’s last men in Thus Spoke Zarathustra, they appear incapable of despising themselves. On the contrary, they think very highly of themselves. They are quite proud of the enlightened opinions they espouse. The hatred they harbor is directed at the racist Trump voters with whom they regrettably share a country.

Woke white people have found many ways to absolve themselves in spite of their obvious privilege and skin color. Their wokeness, however, is mostly performative. As William Voegeli has astutely observed in the American Mind (“Their Sin, Your Penance”):

There are no known examples of any white liberal giving up a tenured professorship or syndicated column so that the vacancy may be filled by a member of an oppressed, under-represented minority group. Though tormented by complicity in the oppression of victims, white liberals reliably devise penances that will be performed by other people.

The louder they denounce their country and their countrymen, the louder they affirm their innocence. In so doing, they are, of course, playing with fire. How long until the woke come for their jobs, their schools, and their homes? This summer, some BLM mobs made it to the suburbs. There will soon come a time when wokeness will no longer excuse whiteness. Will the bien-pensants prefer to die off rather than be thought of as racists? As each passing generation grows more radical, the answer to this question grows more uncertain. 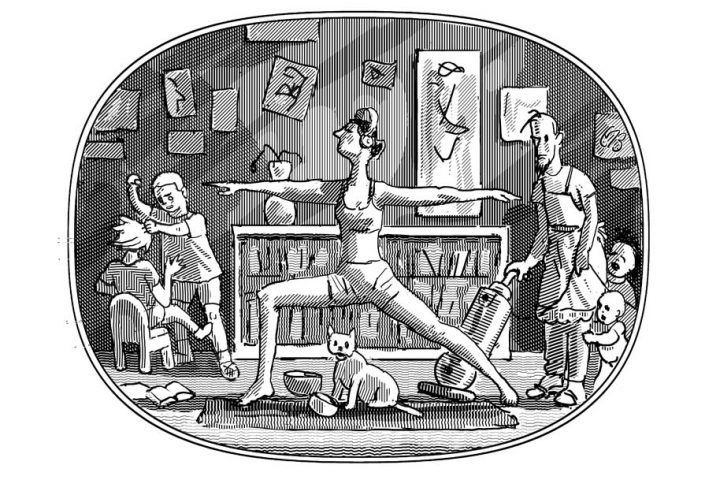 by Harvey C. Mansfield
Family life today is threatened by a theoretical proposition.
View this issue