Rahe explains the genesis of British republican thought and its later embrace by America's founders.

Against Throne and Altar: Machiavelli and Political Theory Under the English Republic

A review of Against Throne and Altar: Machiavelli and Political Theory Under the English Republic

The term “republic” is by far the most popular designation for governments in the world today, and is more popular now than ever. To take an obvious measure, of the 192 member-states of the United Nations, 149 (about three-quarters of them) attach some constitutional description to their geographical names, and of these, at least 123 call themselves republics. Four are commonwealths (a slightly older synonym for republic), while only 22 call themselves kingdoms or principalities. To be sure, the word republic broadly indicates a government that represents the will of the people, but it can stand for a wide variety of constitutional arrangements and political realities. States that describe themselves as republics include, for example, all the members of former President Bush’s “axis of evil”: The Democratic People’s Republic of North Korea, the Islamic Republic of Iran, and of course the Republic of Iraq, now a parliamentary democracy.

Nevertheless, it is clear that the word republic is one with powerful positive connotations. But as readers of The Federalist will know, this was not always the case. Among members of the founding generation, republics were regarded by most students of history as unstable and short-lived arrangements of questionable legitimacy, chiefly suitable for territories no larger than a city-state. The vast majority of states in the 18th century were monarchical. So the Constitutional Convention’s attempt to found a “great republic” over a territory as large as the 13 former British colonies in North America, was bound to be met with skepticism. The only previous experiment in founding a great republic, the English Commonwealth of 1649-1660, was not deemed a success by most political thinkers of the time; and even today it is hard to regard Cromwell and the Commonwealth highly. Yet, as Paul Rahe shows in his stimulating and important new book,Against Throne and Altar, it was precisely the political theory of the English Commonwealth that provided the ideological resources exploited by the designers of the American republic.

Against Throne and Altar sets out to explain the genesis of British republican thought and to suggest some reasons why it was later embraced by the generation of the founders. Rahe’s account of its origins is not the usual tale told by a historian. Most trace the origins of early modern European republicanism back to the Italian comuni of the 12th and 13th centuries. The translation into Latin of Aristotle’s Politics around 1260 gave these city-republics a political theory, and during the Renaissance the humanist movement—conscious of its resemblance to the ancient Roman republic—gave them an historical vision. The greatness of Rome, in the view of Renaissance civic humanists, was a consequence of Rome’s republican institutions, so the revival of republican government would in their view lead to the revival of Roman culture and imperial grandeur. Or so it was hoped. This Italian Renaissance republicanism, famously expounded by Machiavelli, was in due course passed down to Britain and early modern Europe (at J.G.A. Pocock’s “Machiavellian moment”), by thinkers like James Harrington, who drew on Machiavelli’s civic humanism to provide the ideological underpinnings of the English Commonwealth, and later the American Founding.

Paul Rahe’s story is a very different one. A professor of history at Hillsdale College, Rahe is the author of the massive and highly regarded Republics Ancient and Modern (1994). He starts from the Straussian premise that ancient and modern republicanism are two species of statecraft so different that the use of the word republicanism for both is almost an equivocation. Ancient republican thinkers like Aristotle took for granted the natural inequality of men in virtue and wisdom. Their goal was to arrange constitutions so that the wisest and most virtuous men would be in charge of polities, regulating the passions of the less virtuous as reason regulates the passions and appetites in the soul of a good man. Freedom meant freedom from the passions—the freedom to be rational and therefore good. In free constitutions, rational discourse about the state was conducted in public, which led in uncorrupted polities to harmonious rule by the best, and a competition among citizens to serve the common good. The goal of the polity was realized when the few best were able to pursue the godlike activity of philosophy, when the better men could achieve honor, and when the rest could obey and be content. Men were by nature political animals and only achieved their full potentiality as human beings by sharing in their own rule, to whatever degree their natures permitted.

Rahe, following Leo Strauss, believes that a new species of republicanism appeared on the scene with Machiavelli. Jettisoning the spiritual goals of the ancients, this new republicanism was born in the Christian and commercial societies of Renaissance Italy and driven by the desire to satisfy material wants in this life, which in turn required power and empire. Political wisdom meant knowing how to satisfy the desires of the people, and of this the people themselves were the best judge. So political wisdom lay with the people. Human beings had two humors: those who wished to rule others and those who wished to be left alone to seek private satisfaction. (One might see here the roots of positive and negative liberty.) The best modern republic was one in which those who ruled were forced to serve the interests of the many who were ruled, and to satisfy their wants. Like Hume, Machiavellian republicans thought reason to be the slave of the passions. Virtue they redefined as virtù—as know-how, the ability to get things done. Since participation in self-rule was not thought necessary to human fulfilment and happiness, contra the ancients, it was sufficient to have the people represented by elected officials (as the 17th-century Machiavellians discovered). The people do not need to act as magistrates themselves, it was thought, in order to enjoy the benefits of republican government.

In Machiavelli’s view there was one great obstacle to achieving the goals of “modern prudence”—i.e., power and plenty—and that obstacle was the political power of the Church, along with the influence of revealed, dogmatic religion more generally. The Church used its political power to undermine loyalty to the state; its cultural power to weaken military virtue, imperialistic expansion, and to make men place their good in the next life. Christianity, Machiavelli thought, made republics weak and degenerate. Rahe goes further and makes the dubious claim that Machiavelli was against all religion as destructive of political virtù. In fact Machiavelli was (like one of his sources, Polybius) a great admirer of Roman religion and may well have believed, like many other men of his day, that the Christian religion could be reformed to be salutary to rather than destructive of republics. If the latter is the case, Machiavelli would turn out to be a faithful disciple of Lucretius, whom Rahe plausibly identifies as a key influence on the Florentine’s cosmology. But Rahe claims more questionably that Lucretius was an atheist, a view with which few historians of ancient philosophy would concur.

For Rahe, the modern, Machiavellian form of republicanism is deeply incompatible with dogmatic Christianity, which means that intelligent proponents of the Machiavellian republic must have understood that Christianity would have to be destroyed in order for a successful modern republic to emerge. So Rahe’s book contains, alongside his account of the genesis of the political thought of the English Commonwealth, a second—one is tempted to say a more esoteric—story about the nature of political deliberation and the deep origins of the Radical Enlightenment. In antiquity, philosophers and enlightened statesmen were conscious that the uneducated and passionate “many” could not be told the real, rational reasons for the institutions and customs imposed upon them by the wise. One could only communicate with them through myths, fables, legends, and poetry; through poetical and rhetorical arts that worked on their passions rather than appealing to their intellects; and in certain cases through Platonic noble lies. The example of Socrates showed the fate of philosophers who tried to speak wisdom directly to the people. After the political triumph of the monotheistic religions in late antiquity and the early middle ages, philosophers again had to conceal their true philosophical beliefs about God, nature, and morality. Philosophers like Maimonides, al-Farabi, and Averroës and the Western Averroists are, in Rahe’s idiosyncratic interpretation, secret infidels who believed religion salutary and necessary for the common people. They believed that philosophers should reserve wisdom for the wise, at best attempting to mitigate the worst superstitions of dogmatic religion from behind the scenes.

According to Rahe, the growing appeal of modern, Machiavellian republicanism to a few bold spirits helped put the informal truce between philosophers and the many in jeopardy. It led to the formation of a loose party of liberty consisting of Averroists, political Epicureans, Baconians, and libertins who saw the destruction of dogmatic religion as a precondition for a successful modern republic. Rahe thus works very hard to show that the makers of modern republicanism in Commonwealth England were secretly (or not so secretly) of an atheistic and libertine disposition. He is persuasive in the illuminating chapters on Marchamont Nedham, a journalist whose political writings contain startling anticipations of the political thought of the American Founders. Elsewhere he is less so. John Milton is implausibly maintained to be “a thoroughgoing and highly circumspect infidel” in a long chapter festooned with “maybes” and “could haves.” Though Rahe admits his view of Milton is just a “hypothesis,” one is inevitably reminded of the definition of a conspiracy theorist as someone who cannot tell the possible from the probable. In any case, since the previous chapter proves (successfully, to this reviewer’s mind) that Milton was a classical republican, not a modern one, Milton’s alleged infidelity is ultimately unnecessary to Rahe’s broader argument about the atheist roots of modern republicanism.

There is a more interesting, indeed, a fascinating problem to which Rahe only gestures near the end of his book. This is the transformation of the various medieval and Renaissance strands of philosophical infidelity, most of them politically quietist, into a movement to destroy dogmatic religion. Rahe’s study suggests that the establishment of a Machiavellian republic that would satisfy the passions of the people more effectively is a key element in the genesis of what today is called the Radical Enlightenment (to distinguish it from the more moderate Enlightenment that sought only the reform of religion and was compatible with monarchy). To explain the Radical Enlightenment, most historians invoke a long list of preconditions including at least the invention of the printing press, the wars of religion, and the dramatic changes in scientific thinking that occurred over the course of the 17th century. Rahe sees the Radical Enlightenment not as a mere reaction to preconditions but as something voulu, intended and planned for from the time of Machiavelli by a virtual society of esprits forts extending across many generations, a series of men who knew what they wanted and what to do in order to get it. In the end, Rahe suggests, the founders accepted the Machiavellian political theory of the English Commonwealth, not because it had been successful in the past (it hadn’t), but because they thought it was the most enlightened and advanced political theory of the day. They too were Machiavellians. They had the boldness to believe that their statecraft could succeed in establishing “new modes and orders” where their British ancestors had failed. 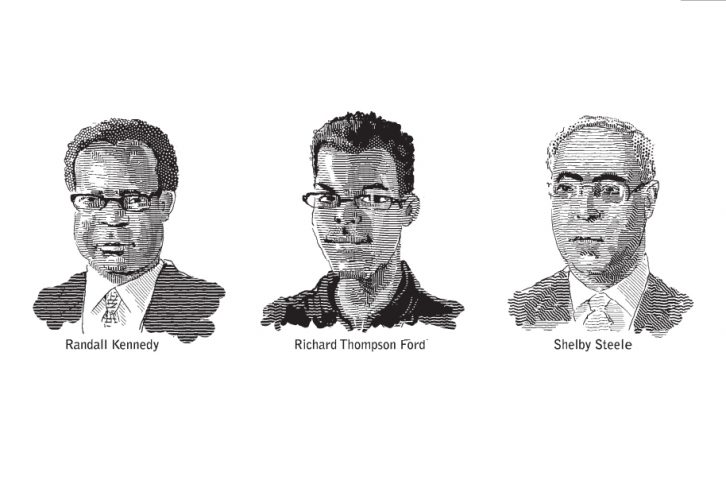 by Abigail Thernstrom
We live in racially interesting times.