A visit from the ghost of liberal-democratic future.

The Demon in Democracy: Totalitarian Temptations in Free Societies

For some time, prominent American conservative intellectuals—dissidents, as Ryszard Legutko of Krakow’s Jagiellonian University might describe them—have been arguing that modern liberal orthodoxy, whether manifested by the shouting down of speakers on college campuses or the smug dismissal of outdated opinions about the family or American history, has come to resemble a totalitarian dogmatism. Conservatives often feel as though they are part of a persecuted underground movement, not respected participants in a debate among equals.

For these intellectuals, Legutko’s The Demon in Democracy will provide powerful affirmation and ammunition. Echoing and elaborating Aleksandr Solzhenitsyn’s diagnosis of Western liberal democracy’s faults and vulnerabilities in his famous 1978 Harvard commencement address, Legutko gives a philosophically profound, elegantly written, persuasively argued account of the affinities between modern Western liberal-democratic regimes and the Soviet Communist regime. His biography bolsters his credibility. Having lived under and fought the Communist regime in Poland for decades, Legutko has since occupied a number of prominent political positions in the new European Union. He is, moreover, a professor of philosophy with a deep appreciation for and understanding of the history of philosophy.

Legutko traces his comparison of Communism and liberal democracy across the themes of history, utopia, politics, ideology, and religion. In each case he provides learned accounts of the two regimes’ similarities and common pedigrees, building on Alexis de Tocqueville’s pessimistic conclusions about the dangers of democracy. The Demon in Democracy takes its thesis beyond the point suggested by the subtitle, Totalitarian Temptations in Free Societies. The temptations of liberal-democratic societies are not merely possible outcomes, but organic and perhaps unavoidable developments of those societies’ first premises and inner logic.

At this point in Legutko’s argument, the American reader might object to the author’s analysis. Legutko himself suggests that much of his analysis doesn’t apply to the American case:

[I]n America we can still see a culture war continuing unresolved for several decades, although the forces of the left seem to prevail gradually over those of the right. Europe has not had such a war, and it is highly unlikely it will break out in the foreseeable future as there is no social force of any significance that could launch an offensive against the cultural monopoly of the left.

A key factor setting America apart from Europe is religiosity’s persistent moderation of liberal-democratic culture. “In the United States,” he writes, “the power, at least until the 1960s, was in the hands of the Christian majority…who interpreted the rules of freedom of religion and neutrality of the state in a way that allowed for a strong presence of religion in the public square.” Echoing Tocqueville’s approving estimation of the relationship between religion and politics in America, Legutko calls the U.S. “a country where one could speak of the real separation of church and state.”

This anomaly might cast doubt on his assertion that anti-Christian phenomena are “the genuine consequences of the spirit of modernity.” At moments such as these, he seems too caught up in abstractions and “isms,” such as the “spirit of modernity” and “liberalism,” to accurately apprehend and assess broad intellectual and political trends. Legutko is insufficiently clear about the distinction between liberal democratic theory—natural rights and basic human equality—and what the University of Dallas’s Christopher Wolfe aptly calls the “tendencies” of liberalism. One may, that is, agree with the proposition that “all men are created equal” without thereby endorsing selfish materialism or anti-religious secularism.

Early in the book Legutko provides an excellent, if brief, treatment of the paradigmatic rights language in the United Nations’s 1948 Universal Declaration of Human Rights. He contrasts its groundless, extravagant, “unjustifiable” notion of rights to that anchored in “a strong theory of human nature such as one finds in classical metaphysics.” He correctly notes the dominance of this “unjustifiable” notion of rights in modern liberal democracies.

The idea of rights derived from a “strong theory of human nature”—a genuine idea of natural rights—is, however, both true and momentously important for morality and politics. Although Legutko’s tracing of the possible pernicious consequences of liberal democracy is excellent and entirely persuasive, his account should have simultaneously emphasized the importance of the truths about humanity and politics that are reflected in liberal democratic theory. The idea of basic human equality may indeed lead to individualism, materialism, secularism, and mediocrity—but it is, nevertheless, true. In his focus on the profusion of “isms” that have grown up around it, Legutko disregards the important truth at liberal democracy’s center.

This truth is, moreover, in profound agreement with Christianity. The early Americans never doubted this fact, incorporating Lockean liberal political principles with Protestant Christian theology throughout the pre-Revolutionary period. Liberal democracy and Christianity can reinforce one another, famous exceptions to this rule notwithstanding. The tendency to mutual reinforcement continued in the antebellum period through, for example, the anti-slavery movement. Christian abolitionism and Lincolnian liberalism formed political history’s most powerful confluence of rational natural principles and Christian religious principles. Legutko might have given this example due weight if he had discerned how very different America is from Europe.

Throughout, he lumps together the “ideological triad” of “class, race, and gender,” dismissing each element as an enemy of true thinking and sound politics. He fails to note any distinction between “a proponent of the brotherhood of races, a critic of the Church, and a supporter of homosexual marriage.” Legutko even refers to something he calls “African-Americanism.” As masterly as Legutko’s analysis is in general, and of the European context in particular, his treatment of America’s racial issues is clumsy.

These three critiques of Ryszard Legutko’s account—neglecting the truth of natural rights and human equality, largely ignoring the American case, and mishandling the issue of race—are closely connected. Indeed, if there is a way to resist the “totalitarian temptations in free societies,” it lies precisely in resurrecting the true idea of natural rights and equality, as embodied first in the American Founding, and then applied by Lincoln, Frederick Douglass, and others to the issue of slavery before the Civil War. In America, as Tocqueville observed, there is a model for appreciating the truth of certain liberal democratic principles without jettisoning religion and falling prey to all of the harmful “isms” Legutko so eloquently refutes.

My suspicion is that Legutko would, if more thoroughly acquainted with the American context, and especially African-American history, be sympathetic to this criticism. As it stands, his book is an illuminating window into the contemporary situation in Europe and provides a fruitful point of comparison to America’s current situation. The Demon in Democracy is both a visit from the ghost of liberal-democratic future, and a reminder of the crucial importance of the spirit of our own liberal-democratic past.

S. Adam Seagrave is the Kinder Institute Associate Professor of Constitutional Democracy and associate professor of political science at the University of Missouri. 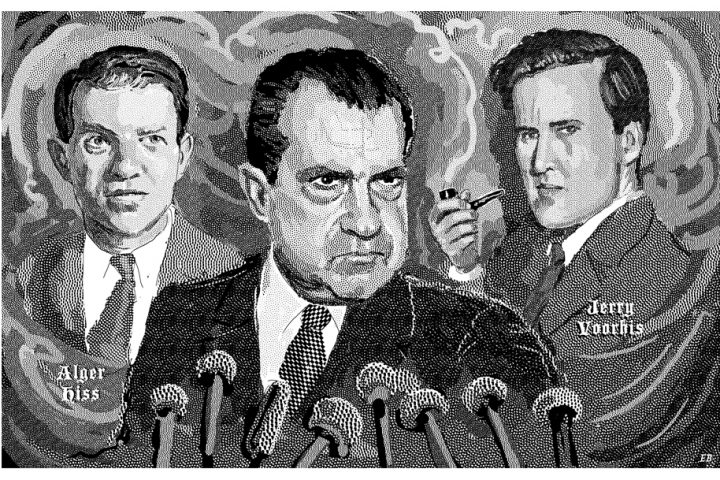 by Michael Nelson
In many ways, Nixon was decisive in Trump's victory.