Cultural Literacy: What Every American Needs to Know The Making of Americans: Democracy and Our Schools The Schools We Need and Why We Don’t Have Them 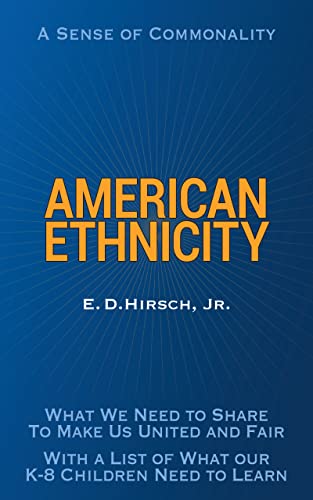 American Ethnicity: A Sense of Commonality

Conservatives with long experience remember 1987 as the year The Closing of the American Mind was published. A sensation that sat atop the New York Times bestseller list for months, the book landed Allan Bloom on The Oprah Winfrey Show and inspired a generation of young Reaganites. But the volume most supportive of conservative thinking during the “Canon Wars” was slightly lower on that year’s bestseller lists: Cultural Literacy: What Every American Needs to Know by University of Virginia professor E.D. Hirsch, a literary theorist and staunch liberal Democrat interested in improving grade-schoolers’ lagging achievement. Hirsch had no interest in assisting the Reagan Revolution, but his book gave conservatives a better weapon against progressivism than did any other published at the time.

Why would a study of what youths learn in the fifth grade be a bestseller for six months and a topic discussed in faculty lounges, the U.S. Department of Education, and People magazine? The obvious answer was the appendix that Hirsch attached to the book, a list of several thousand names, titles, dates, places, ideas, and idioms familiar, more or less, to the culturally literate citizen. The most discussed part of the book, it infuriated leftists, feminists, and multiculturalists because of its Dead White Male, Eurocentric focus. In by Theodore Dalrymple
If there is one lesson that the pandemic ought to have taught, it is intellectual modesty.