Kevin Vickers and the Spirit of Liberty and Sacrifice.

On October 22, 2014, in Ottawa, Canada, a violent terrorist act came within moments, and a few paces, of becoming a political catastrophe. A Canadian convert to Islam shot to death a soldier performing honor guard duty at Canada’s National War Memorial, and then stormed past security and into the Centre Block of the nearby Canadian Parliament buildings, shooting another guard who attempted to stop him. On either side of him were caucus rooms occupied by members of the governing Conservative Party, including Prime Minister Stephen Harper, who was quickly hidden away in a closet, and of the New Democratic Party, including the Leader of Her Majesty’s Loyal Opposition, Thomas Mulcair.

As a fusillade of gunshots echoed deafeningly off the massive gothic revival walls, Members of Parliament barricaded wooden doors with heavy furniture, fashioned rudimentary weapons from flagpoles, and hoped for the best. And the best is what they got. Unbeknownst to the M.P.s, the Sergeant-at-Arms of the House of Commons, Kevin Vickers, was taking matters in hand. Dressed in ceremonial regalia and without benefit of body armor, Vickers moved to place himself at arm’s length from the determined terrorist, on the opposite side of a large stone column. Vickers then left his position of cover, dived to the ground, spun so as to land on his back, and fired upward at the assailant, striking him multiple times.

Such a feat, on the hard marble floors of Parliament, would be extraordinarily difficult for anyone, let alone a 58-year-old, 6’ 4” man. Perhaps even more strikingly, video shows Vickers seconds later taking what appears to be a casual stroll through Parliament, apparently checking to make sure a door is locked. The only thing that belies the appearance of calm is the sidearm dangling from his right fist, pointing toward the floor. He does not even appear to be breathing heavily, let alone sweating. Instead, he displays an almost medieval demeanor, the countenance of the butler from Downton Abbey, albeit with a martial edge. It was Vickers who understatedly informed the M.P.s that the suspect had been “engaged,” and was “deceased.” It’s hard to take in this scene without immediately thinking of political theorist Harvey Mansfield’s definition of manliness: “the next-to-last-resort, before resignation and prayer.”

The attack on Parliament Hill generated virtually no therapeutic language or bureaucratic behavior. Few, if any, suggested that the Sergeant-at-Arms seek counseling in light of the tragic events. And no one dared suggest that he be suspended with pay pending the outcome of a full shooting investigation—nor was there any administrative procedure by which such a course of action might have been precipitated. Instead, Vickers showed up for work bright and early the next morning, and he didn’t step out of character even then. As he carried the ceremonial mace—symbol of the Speaker’s authority—to open the House, he was greeted by the thunderous and sustained applause of M.P.s and could barely bring himself to nod in recognition of the honor (save for the customary bow as he removed his bicorne hat, and assumed his usual place in the chamber). There was a man—everyone saw it—standing apart from the modern administrative state, and above ordinary civil service conventions. He was freed to be honorable, and to receive honor.

That there was such a man is no accident. The position of Sergeant-at-Arms is deeply rooted in prerogative and tradition rather than legality and administrative bureaucracy. Honor and duty to the House are its guiding principles. On January 4, 1642, Charles I, in an unprecedented move, entered the English House of Commons with armed men, seeking to arrest five members of the Long Parliament (so named because for 20 years members did not agree to dissolve it). Speaker William Lenthall’s steadfast refusal to divulge the location of the members emphasized his service to the House alone, and amounted to an assertion of the independence of the House from royal control or intimidation. His words would echo across the Atlantic more than a century later: “May it please your Majesty, I have neither eyes to see nor tongue to speak in this place but as the House is pleased to direct me, whose servant I am here, and humbly beg your majesty’s pardon that I cannot give any other answer than this.” No monarch has entered the House since that date.

The understanding and spirit of liberty shown by that event were not lost on the American Founders. Ten years before the outbreak of the American Revolution, John Adams counseled Americans to act with that spirit in mind. Britain, “though a few individuals may be corrupted,” wrote Adams, was the birthplace of constitutional liberty as the Americans understood it, and was far from being full of the “luxurious, effeminate, and unreasonable.” It was instead the land that “gave Caesar so warm a reception, which denounced hostilities against John till Magna Carta was signed, which severed the head of Charles I from his body, and drove James II from his kingdom.” Adams located the lineage of American liberty in these manly assertions of rights. Just over a century later, Woodrow Wilson argued that the American Constitution—which gave pride of place to the people’s representatives—was broken. Fixing it required concentrating power once again in the executive because congressional independence was a barrier to progress: confirm thy soul in self-control, thy liberty in administrative law.

As the Speaker serves the House, so the sergeant-at-Arms serves the Speaker. The word “sergeant” derives from the Latin serviens—one who serves—and the Sergeant-at-Arms knows whom he serves. The Sergeant’s responsibilities include not only bearing the mace at the open and close of each session, but preserving order in the viewing galleries and spaces outside the House chamber. Appointed in Canada by the federal cabinet, the Sergeant is the man of the House, not the sovereign. He thus visually symbolizes and enforces separation of powers in ways that are not simply legalistic. He maintains the independence of the House not only from violent interlopers, but from would-be usurpers. Nowadays, the Usher of the Black Rod—the Sergeant’s rough equivalent in the English House of Lords and in Canada’s appointed Senate—cannot enter the people’s House without permission. As the queen’s personal attendant when she is in Parliament, and messenger at other times, Black Rod must knock three times on the chamber’s doors, wait for the challenge of the Sergeant-at-Arms, and be granted passage. Even royalty must know its place.

Wearing black tailcoat and hat, and carrying a sword to symbolize his own authority, an effective Sergeant-at-Arms must look and act the part. In both England and Canada, the post has traditionally been held by active or retired military or police officers, though this tradition has been changing in recent years, and not for the better. The office reached its nadir in England with the appointment in 2008 of Jill Pay, the first Sergeant-at-Arms to come from a civilian civil-service background. She was generally seen as feckless, or worse. Vickers, by contrast, was a widely respected 28-year veteran of the Royal Canadian Mounted Police when he was appointed. But on that day in October, he was not acting as an executive “law enforcement” officer but as a servant of the Commons. By virtue of his unique office, he served as a powerful reminder of the requirements, and price, of self-government. Bound by ritual and convention, he moved beyond them to assert the most fundamental rights of nature, and in so doing he defended not only lives, but the institution that most completely embodies, in the parliamentary system, the natural right of consent.

Ottawa is a city that prides itself—as does the country of which it is the national capital—on its openness and tolerance, as well as its low-key approach to security. This pride is close to the hubris of moral superiority, almost invariably going along with a deliberate downplaying of the martial, manly virtues that Canadians tend to associate with their southern neighbor. And yet, the attack on Parliament Hill reminded people in an instant that free government depends on force as well as reason, on virtue as well as law. The spirit of liberty is preserved through love of liberty—and the sacrifices that such love calls forth.

But as Adams cautioned, the spirit of liberty without wisdom to direct it is little more than brute rage. It needs to be educated, and nothing serves to educate like exemplification. Holding an office whose prerogatives are the accretion of centuries, Kevin Vickers viscerally reminded everyone of those qualities that are ultimately higher than any scientific “administration.” And he did so by pitting himself against a murderer besotted by an ideology that is the clearest enemy of self-government in the contemporary world. In the immediate aftermath of the attack, Vickers clearly sensed what he represented. And more importantly, so did everyone else—and all played their parts. Vickers rejects any suggestion that he be considered a hero, of course—because heroism would imply that he did something above and beyond his duty. The Language of Liberty

by Michael Barone
A review of Inventing Freedom: How the English-Speaking Peoples Made the Modern World, by Daniel Hannan. 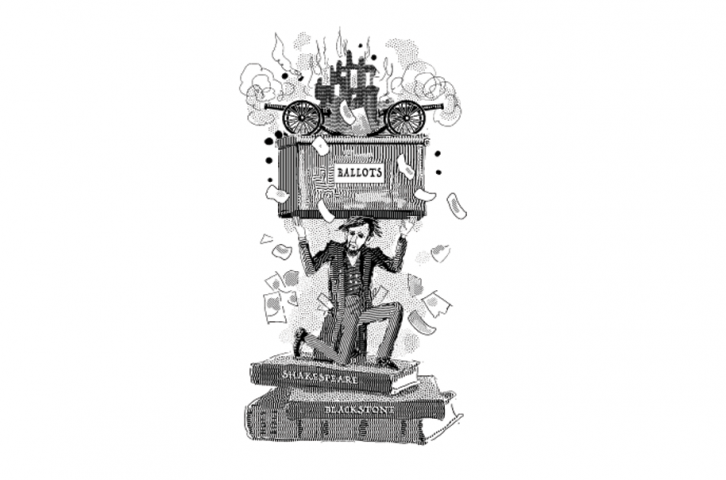