The Common Form of All the Virtues

A sermon on charity in deed and speech.

Editor's Note: This is a sermon delivered at Appleton Chapel in Memorial Church, Harvard University, on February 12, 2008. The morning service lasts 15 minutes and the sermon is strictly limited to five minutes.

The Text: "Though I speak with the tongues of men and of angels, and have not charity, I am become as sounding brass, or a tinkling cymbal…. And though I bestow all my goods to feed the poor… and have not charity, it profiteth me nothing. Charity suffereth long, and is kind; charity envieth not; charity vaunteth not itself, is not puffed up."
—I Corinthians 13

The tongues of men still praise charity, though never in words of such surpassing beauty as these. But what of the deeds of men? A recent book by the economist Arthur C. Brooks, titled Who Really Cares?(2006), finds that liberals and conservatives give to charity at strikingly different rates. A fact, or factoid, to sum it up: the liberal, wealthy, educated, secular city of San Francisco, with the same population as the conservative, less wealthy, less educated, church-going state of South Dakota, gives 44% less of average family income to charity.

Before partisan juices start to flow, let me hasten to say that I believe this difference represents different attitudes in liberals and conservatives that are both defensible. When not arguing on the basis of the Bible, conservatives say that generosity is a virtue because it is voluntary and that therefore it should not be imposed politically. There will always be poor people and they will always need this virtue in those more fortunate. Conservatives prefer the deserving poor, by which they mean, not those who deserve to be poor, but those who deserve not to be poor. All the poor should be helped, but the need for help to those who deserve better shows that fortune, or luck, is a factor in human affairs. There are undeserving rich as well as deserving poor.

The reason that liberals give less, I would say in their name, is that they believe in justice more than generosity. They think that generosity is hit-or-miss, whereas justice covers everyone, at least in principle. For greater coverage they are willing to sacrifice the voluntary aspect of virtue and go for taxes that compel everyone to be charitable. They might agree with St. Paul that in practice voluntary charity can make a person puffed up with his virtue. So they are not impressed with President Bush's recent suggestion that people who want higher taxes can always pay more to the Treasury voluntarily. Liberals do not believe that there is any necessity for the poor to exist. They were willing to fight a war on poverty—and Americans never fight a war they do not expect to win. To win this on-going, but not endless, war, liberals are willing to enlist themselves and to conscript everyone else.

What does the Bible say to these arguments? More than I can say now. But examine the phrase "Blessed are the poor." Are the poor blessed for some such virtue as endurance of suffering, or because they are needy? It seems the latter. We often use the word "charitable" to refer to the act of overlooking a defect, rather than of rewarding virtue: a charitable grader, for example. St. Thomas Aquinas says that charity is the chief of the three theological virtues based on the word of God—faith, hope and charity—as distinct from the moral and intellectual virtues that can be understood with the reason of man. Charity is the common form of all the virtues because all depend on love of God. God does not, of course, overlook defects, but He redeems them by making it possible to live a perfect life with Him. The blessed poor stand in for imperfect humans, for all of us are needy, and not least among our needs are better arguments. One way to improve your arguments is to follow the example of St. Thomas in his formal method of stating the objections of the opponents to every point he wants to advance. In this way you will not scorn your opponent but find a better argument for him than he has found for himself. To do this "the tongues of men and of angels" need charity. by Ronald J. Pestritto
In order to defeat liberal fascism, conservatives will need to awaken from the progressive spell. 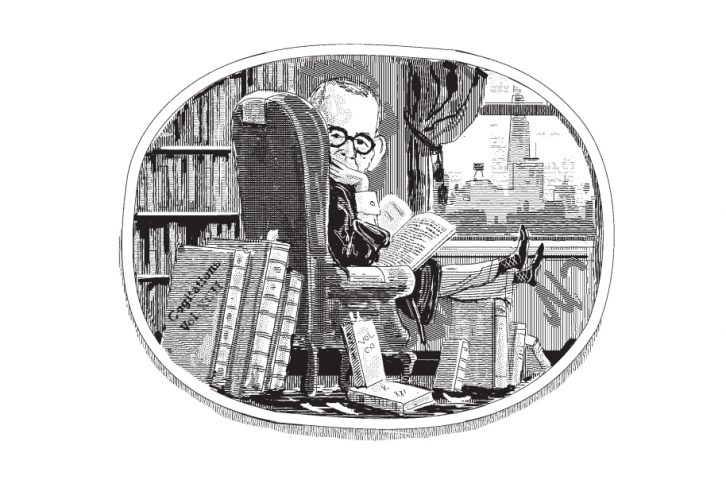 by Joseph Tartakovsky
At 70 years old, America's finest essayist isn't ready to hit the showers just yet.
View this issue