Liberal commitments to science and viewpoint diversity are in tension. The Constitution of Knowledge: A Defense of Truth

Over the past decade, practically every institution controlled by liberals—from universities and non-profits to the Democratic Party—has been taken over by political correctness. The identarian Left has managed to radicalize even those institutions that were once relatively apolitical. Free speech, academic freedom, and colorblindness—long considered foundational principles of the Left—have become as much right-wing clichés as American exceptionalism or free market economics. This total victory of identity politics over its side of the political spectrum was no accident. Liberalism legitimizes race- and gender-based criticism of Western society, then finds itself unable to resist that criticism when it is turned inward against liberalism itself. Feeling guilty about how white and male their movement is, more tolerant liberals have two options. They can bend over backward for diversity, which often means compromising their principles to achieve the right demographic balance. Or they can ignore the issue, having no good answer to the question of why people should join a movement in which white males predominate.

When Harper’s Magazine published an open letter from liberals last summer expressing concern about censorship and cancel culture on the Left, its organizers had to go out of their way to find women and minorities to sign. When the letter was published, some of those same women and minorities renounced their involvement upon reading the full list of signatories. This episode was emblematic of the challenges liberals face. So was the termination of New York Times columnist Donald McNeil, Jr., at the behest of black employees working at the paper. When older white men are purged, they take their more dated understanding of liberalism with them; firing the old guard ensures that all who remain will affirm the new, identity-based dogma.

Jonathan Rauch’s The Constitution of Knowledge: A Defense of Truth perfectly reflects the liberal dilemma. The author, a fellow at the Brookings Institution and a contributor to the Atlantic, is trying to fight a two-front war against Trumpism and identity politics to preserve Western institutions. But in doing so, he inadvertently reveals that criticism of cancel culture is powerless when made without challenging the Left’s deepest beliefs about identity. One immediately notices how conventional the author’s intellectual outlook is. Rauch believes in democracy and capitalism, but with reasonable checks on each. He thinks the scientific method is good and you should listen to experts. He celebrates growing tolerance but thinks cancel culture goes too far. He’s alarmed by Trumpism, by misinformation about election fraud, by what social media is doing to political discourse, and by Vladimir Putin’s meddling in our democracy. Rauch’s deference to the establishment actually goes beyond what one would expect from a liberal who lived through the Bush years. He cites people like Generals Michael Hayden and Stanley McChrystal as leaders of a community which preserves and seeks truth—the national security establishment, in Rauch’s view, is right up there with scientists and other credentialed experts.

Rauch’s very safe, very establishment criticism of cancel culture is that institutions are important. There are “three liberal social systems” that improve society and move us toward truth. The economic system is basically the market; the political system is the U.S. Constitution understood in light of James Madison’s theory of checks and balances; and the epistemic system is science. Each of these works because it prioritizes rules, processes, and principles over claims based on subjective factors such as identity and personal revelation. But the analogy between the three systems is extremely strained. For instance, markets incentivize individuals to provide goods and services people want, and prices supply feedback throughout the system. What does such a system have in common with peer review, which Rauch admires as instrumental in the progress of science? Academics advance by getting other academics to review and cite their papers. Particularly in the social sciences and humanities, entire fields can develop where dominant ideas are repeatedly tested against elite opinion, but never against reality. In economics, the market tends (albeit imperfectly) to weed out those who are incompetent and deluded about how the world works. But there is no check on the proliferation of fake expertise built into the system of grant applications and peer review. Once an epistemological bubble forms, it can continue indefinitely, and liberalism has no “process” by which to strip fraudulent cranks of their prestige and influence.

From reading Rauch, one gets the impression everything was fine with the “reality-based community” (yes, he uses that term) until some Yale undergraduates appeared on camera in 2015, surrounding and screaming at Professor Nicholas Christakis, whose wife, Erika, drew the ire of undergraduates when she dared to suggest that adults should exercise their own discretion in selecting Halloween costumes. But for decades before the Yale fiasco, absurd falsehoods had already become doctrine among many in the press and academia. Marxism is still going strong in universities after failing spectacularly in reality, as are ideas such as the interchangeability of the sexes and the belief that genetics has nothing to do with life outcomes. These absurdities are products of the peer review process Rauch praises: the “reality-based community” was discredited long before Trump and wokeness came along. Rauch honors the success of the scientific community in sequencing the genome of the novel coronavirus, making possible today’s vaccines. But he ignores the public health community’s enormous blunders during the same period: going from discouraging masks anywhere to mandating them everywhere; to this day not making clear that COVID-19 is highly unlikely to spread outdoors; and praising protests associated with Black Lives Matter while denouncing those on the right.

To show how science should work, Rauch points to the 19th-century debate among naturalists, between so-called Neptunists and Vulcanists. After several decades, the latter, who believed that granite came from volcanoes rather than being crystalized in water, decisively won the argument. Yet although the triumphs of the natural sciences are undeniable, where are the comparable success stories among the social sciences? Neptunists are gone. But in the softer sciences, entire departments are still dominated by those who believe the human psyche is a “blank slate” having no fixed nature, waiting to be shaped by sociological forces. Though astronomers can trace the development of the universe to the first moments after the Big Bang 13.7 billion years ago, the “reality-based community” no longer knows how many human sexes there are. Despite our much greater wealth, social pathologies like crime, illegitimacy, and drug abuse are in some cases worse than they were 100 years ago in many advanced Western countries.

On the surface, the hard and soft sciences seem to have much in common. In both, experts gain their positions of power and influence by completing Ph.D.s, publishing in peer-reviewed journals, and working at universities. Yet while the hard sciences are continually advancing, disciplines studying human affairs in many cases do not advance at all or have the knowledge they produce drowned out by political activism disguised as scholarship. Granted, the Right has not responded in a healthy way to elites’ flight from reality. Rauch is correct that conservatives have often indulged in fake news and conspiracy theories, and the right-wing epistemological bubble isn’t something any intelligent conservative should be proud of. But it still remains true that institutions dominated and staffed by liberals have been broken for at least a few generations now.

Moreover, there is a sense in which Rauch’s liberalism fails on its own terms. Like social psychologist Jonathan Haidt and other moderate liberals, he considers diversity of viewpoints central to an epistemologically healthy system of knowledge creation. Yet he also believes in institutions that by necessity raise up some voices and exclude others. Even by deciding which fields to fund at universities, society must make some decisions about which communities use appropriate methods to explore social and political questions, and which do not. Nobody would argue for university departments in astrology, nor that political science would benefit from including Nazi thinkers. Given that we all agree some views and perspectives should be excluded from knowledge-producing processes, the question simply becomes, “which ones?” Rauch would like a place for conservatives; the woke would not. This doesn’t seem to be an issue of deep principle, but a question of where we draw the line.

Whether he realizes it or not, Rauch’s commitments to science and viewpoint diversity are in tension. He talks of his admiration for the “epistemic breakthroughs” of Enlightenment thinkers, despite their works being “flawed with the inequities and blind spots of their eras (one of which is reflected in the fact that all of them were men).” Yet isn’t it perhaps remarkable that the systems and thinkers Rauch admires so much came from one sex, in one broadly defined culture, making up a small minority of the world’s people? If the institutions such men created are so incredible, perhaps diversity of perspective and opinion aren’t as important as Rauch would like to think. I note that while the author criticizes what social media have done to our brains and our public discourse, the one website he really admires for upholding epistemological standards is Wikipedia—which is often criticized, as he points out only in passing, for being too male.

The idea that the modern economy, the American system of government, and contemporary science were created by white men is not a fantasy the woke imagined out of thin air. Given the praise his book has received from the American establishment, it is quite striking how “non-diverse” Rauch’s intellectual inspirations are: we get references to Adam Smith, Jean-Jacques Rousseau, Francis Bacon, Jonathan Haidt, John Locke, David Hume, Galileo, Thomas Kuhn, Émile Durkheim, George Orwell, Abraham Lincoln, Karl Popper, Montesquieu, James Madison, Socrates, and so on. Liberals like Rauch have simply been unable to reconcile their respect for traditional institutions with their support for diversity. Their implicit argument—that these great things happened to be created by white men only through some accident that has no implication for how they function today—does not seem very credible. The far Left, by contrast, has an easy answer to this conundrum: deconstruct the institutions and demand something more representative to replace them.

Given their internally coherent message and willingness not to flinch from the radical implications of their principles, it is little wonder that the woke have routed the old Left so completely. Ironically for Rauch, it was the academy—the institution that puts the most faith in peer review and subject-matter expertise—that seeded the ideas that would ultimately undermine the liberal project.

Richard Hanania is the president of the Center for the Study of Partisanship and Ideology. 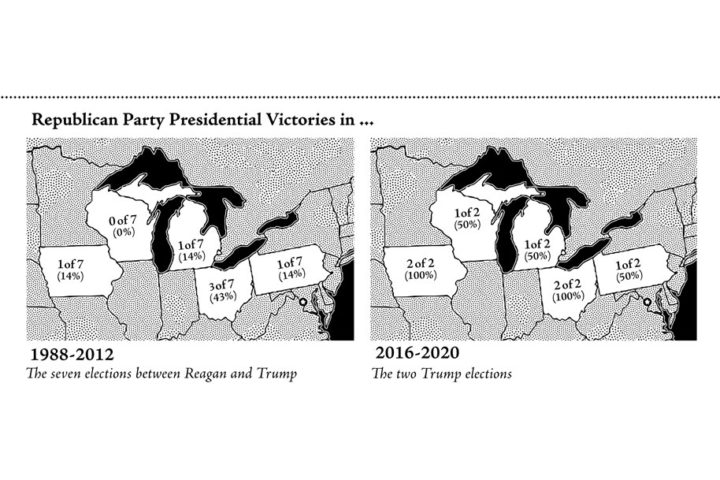 by Jeffrey H. Anderson
What it will take to win in 2024.
View this issue