Gilley’s portrait of Sir Alan Burns is the best defense of empire a reader could ask for. Bruce Gilley’s The Last Imperialist: Sir Alan Burns’s Epic Defense of the British Empire is probably the last great work of British imperial history that will ever be published. The field has been overtaken by political correctness, which holds as an unquestionable pillar of orthodoxy that empires, especially white European empires, are bad. There are still some excellent living practitioners of imperial history, such as Niall Ferguson and Jeremy Black (both of whom contribute favorable blurbs to the present volume). But once they are dead, no one is likely to replace them.

Gilley, a professor of political science at Portland State University, knows better than most the systematic political abuse that deters scholars from writing worthwhile imperial history today. In 2017, he experienced an early instance of “cancel culture” when his peer-reviewed article “The Case for Colonialism” was withdrawn by the journal Third World Quarterly after an eruption of left-wing outrage. In the fall of 2020 his newest book, a biography of colonial administrator Sir Alan Burns, was surreptitiously deleted from the catalogue of its original publisher, Rowman & Littlefield, thanks to a hostile petition circulated by a Canadian academic who blogs under the title “Marxist-Leninist-Maoist Mayhem!” The rights were later acquired by Regnery.

Now the book is finally here, and it is the best defense of empire a reader could ask for. Gilley does not lazily base the merit of imperialism on the material benefits it conferred on subject peoples. After all, even racists could have brought wealth and advanced technology just by showing up. Gilley instead offers us a portrait of an imperialist in his own words, and Sir Alan is as enlightened, liberal, well-intentioned, and wise as any modern reader could possibly want him to be.

The British Caribbean was traditionally the last assignment in an imperial civil servant’s career, since the Colonial Office knew from experience that men stationed there often became alcoholics for lack of anything better to do. But the Caribbean was Burns’s starting point. Born in Saint Kitts to a middle-class family, Burns came from humble beginnings, rendered still more humble after his father died at age 44. When he was 16 he had to quit his formal education for lack of money and take a job in the colonial civil service. Gilley compares Burns to another Caribbean defender of empire, V.S. Naipaul, who was also born on the periphery of civilization and, through hard work, made it to the center. “Alan, like Naipaul, had been rescued from the West Indies by the ‘universal civilization’ of the West,” Gilley writes.

He started out as a junior revenue officer in St. Kitts, the lowest rung in the colonial service. Gilley reproduces a marvelous photograph of teenage Alan behind his desk in Basseterre, flanked by uniformed staff of multiple races. The next photograph shows him in his World War I uniform in West Africa, where he saw combat. By the middle of the book, photographs show the imperial officer of visual cliché, the “ostrich-feathered governor” who served the empire in Nigeria, British Honduras (Belize), and the Gold Coast (Ghana).

“Alan’s first assignment in Nigeria in 1913 was to travel up the Benin River to relieve a customs supervisor who had gone mad”—Gilley’s terse description of how a 26-year-old Burns inaugurated his African career is a reminder that empire presented more exotic challenges than were faced by civil servants back in London. On top of the usual problems of government, like negotiating compromise between interest groups and staying within budget, colonial officers had to deal with madness, tropical diseases, race riots, witchcraft, and cannibalism. Joseph Conrad was a realist.

As governor of the Gold Coast, Burns presided over a truly Conradian episode. The “juju murder” became a cause célèbre in both Accra and London. In many West African tribes, when a king died, the traditional rites of succession required a blood sacrifice. The unfortunate Akyea Mensah was chosen for this purpose in 1943. He was lured to the royal palace at Kyebi, struck on the head, stabbed through the cheeks to stop him from pronouncing a curse on his attackers, and slowly drained of his blood, which was collected for use in the ritual “washing the stool” for the new king’s coronation. An unidentified male body was later found buried in a riverbank.

With two eyewitnesses to the killing and no other explanation for the victim’s sudden disappearance, a majority-black jury swiftly convicted the eight attackers. Burns was pleased with the outcome: juju was a gruesome system of practices and beliefs which the British could earn goodwill by attacking, as in another recent case when a man murdered a five-year-old girl to use her bones in a ritual and was quickly hanged, to popular acclaim. Unfortunately for Burns, in this case the defendants were the cream of the local elite, the old king’s closest associates, made wealthy by booming land values in a region rich in cocoa and gold. They had enough money to keep appeals going as long as their lawyers could come up with new tricks, which soon stretched into years.

The objections were spurious. The accused were plainly guilty, and nothing about the trial was unfair. Eventually the defense team was reduced to making insinuations about the shortcomings of the judge, a Muslim from Cyprus, to Burns’s outrage. “Reference to his Turkish origin and Muhammadan religion is a disgusting example of racial prejudice and religious intolerance for which I have utter contempt,” he wrote to his superiors in London. To Burns these defendants were not disadvantaged by race but unfairly advantaged by wealth and influence. Nevertheless, despite the baselessness of the entire scandal, Burns was bullied into commuting most of the sentences. Of the original eight perpetrators, only three were hanged.

Imagine two brothers circa 1920: one a war hero with a promising career, recently appointed second-in-command to the governor of the Bahamas; the other a clerk and part-time scribbler who had just joined the Communist Party of Great Britain. Which of the two would you expect to be destined for success? Whose worldview would you expect to prevail?

Sadly, the answer in this case was not the logical one. Alan’s brother Emile was in every way a less impressive person, and yet by the time the two men reached retirement age, Alan’s lifework lay in ruins at the hands of men like Emile and his allies—in some cases, literally. Among the many services Emile performed for Moscow was training anti-colonial activists in the practice of Communist revolution. One of his students was Kwame Nkrumah, who led the independence struggle in the Gold Coast and became the first president of Ghana.

Emile Burns lived until 1972, long enough to see Nkrumah turn into a tyrant. Yet he never recanted his Communist opinions. His daughter Marca, a veterinarian and animal geneticist, worked for many years in Ghana and wrote books praising Nkrumah’s socialist policies, as well as serving as branch president of the Anglo-Cuba Solidarity Committee. Here we have the riddle that Alan Burns never solved: how is it possible that opponents of empire never learn?

After retiring from civil service shortly after the juju affair, Burns poured his decades of experience into books presenting rational arguments for empire, such as In Defence of Colonies (1957). But once the wave of decolonization was in motion by the 1960s, no one was much interested in listening to anything he had to say. People are even less interested now, though decades of postcolonial misrule have vindicated Burns’s direst warnings. Today’s conventional wisdom is that the only voices worth listening to on the subject of empire are those of the colonized themselves.

Gilley quotes just such a voice at the end of his book. One of Burns’s great-nephews was studying at a Canadian university when a Ghanaian girl confronted him in class, saying, “You should be ashamed of being related to a colonial governor.” The following semester, the girl sought him out to apologize. She had told her relatives back home about the incident and, far from praising her, they gave her a tongue-lashing. “I’m sorry for what I said,” she told him. “It turns out my people loved your great uncle.”

Helen Andrews is a senior editor of the American Conservative and the author of Boomers: The Men and Women Who Promised Freedom and Delivered Disaster (Sentinel). 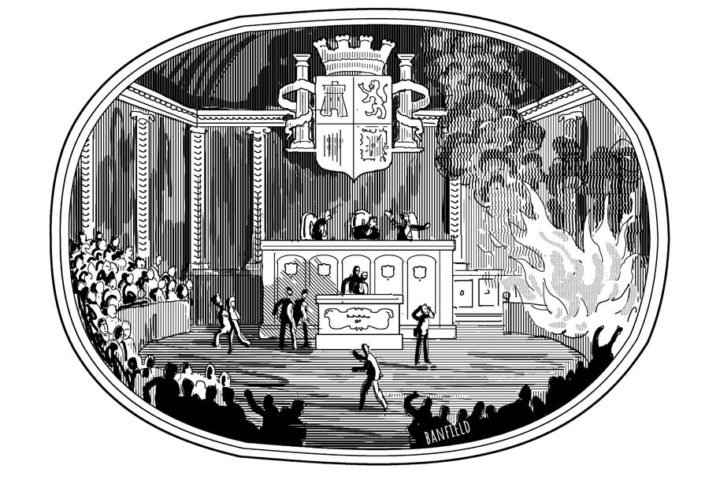 by Steven F. Hayward
There is a complete disconnect between the reality of climate science and the authoritarian designs of many climate agitators.
View this issue