When nations in decline are assaulted from without, they often lose the capacity to defend sensibly.

When nations in decline are assaulted from without, even if gently or only rhetorically, they often lose not only the will to defend but the capacity to do so sensibly. They turn upon themselves in fits of self-destruction marked by truncated, simplistic, and merely assertive disputation. Illegal immigration, an external pressure, brings forth arguments of this type.

Each party to the immigration debate seems to know only a single truth. One faction says that it is a mistake to conflate illegal immigration with terrorist infiltration: of the many millions of illegal crossings only a handful are made even by people of suspect origin, and therefore the borders should remain porous. Apart from the non sequitur, this takes no account of the fact that terrorists by the handful are effective; that if one border is open, traffic blocked at the others will flow to it; and that if a nation hasn't the will to control its frontiers, and thereby disestablishes them, its sovereignty will deflate.

Not a single illegal immigrant should or need enter the United States, not one. Contrary to the common wisdom, the borders are easy to seal, and controlling entry is hardly totalitarian. This is not the same as the question of how much immigration to allow, an important matter rightly the political decision of the whole people rather than of a febrile militia of Willie Nelson look-alikes, or the purposeful inefficiency of a fence. And lest the government nurture a parallel and unrepresentative authority, it would best attend to its responsibilities and displace the armed geezers who have stepped in where it has failed, though to do so with the military is wrong on half a dozen counts.

This spring's "pro-immigration" marches attempted lamely to confuse legal and illegal immigration. Of course everyone in the New World is an immigrant or a descendant of immigrants, and immigrants have built America and continue to do so. Legal or illegal, they are almost universally good people who work to better their lot and that of their children. That is not, however, license either for illegal entry or America's failure to have an immigration policy except by unregulated default.

Businesses large and small, careerists with Latin nannies, and those who want wages low, the unions suppressed, and their gardens well tended have made common cause with their political opposites. The latter, who have embraced multiculturalism and bilingualism, and who, though they may be little blast-furnaces of ostentatious compassion, are in their disdain for America as ruthless as commissars, would be delighted to see it changed any which way as long as it becomes unrecognizable. If you worry about the potential for California and the Southwest to calve like melting glaciers and cleave to Mexico, or vice versa, the Left will mock your distress as it once mocked and reviled anti-Communism. And in the same vein the equanimity of the business Right is similar to the self-satisfaction of those who would have sold Lenin the rope with which he planned to hang them. This is the lobby, strange as it may seem, for illegal immigration.

Their position is indemnified not only by stupidity and greed but by the fact that it is impossible to make a simple case for sovereign control of the borders without attracting nativists and xenophobes who pollute the argument with racism, protectionism, and statist economics. Tossing aside one of America's great strengths, they would simply end immigration. As a graceless technique of law enforcement, they would deny basic services to the children of illegals, and they speak of rounding up 12 million mainly Latin Americans for deportation, forgetting the signal fact that over the years, by our lack of a policy, neglect of enforcement, and systematic indecision we have at the very least made of ourselves an attractive nuisance.

By allowing the bloc that benefits from illegal immigration to extend its invitation and welcome, the whole nation is complicit in luring these people here. After doing so and benefiting immensely from their labor, to turn them away from emergency rooms, make their children truants, or expel them would be beneath contempt. And yet it is not surprising in light of the trajectory of our politics and morals that this is something some of us urge and the rest are forced to contemplate.

Other than simple sovereignty and the control of borders, which should be beyond debate and would if properly approached immediately contain and stabilize the problem, the essence of the illegal immigration question, muddled though it may be by sophistry and peripheral claims, is the importation of labor.

To assert as some have that illegals do not depress wages because they do the jobs Americans refuse is the kind of nonsense economists speak when they strain to be counterintuitive, and similar to saying that cheap imports do not hold down prices. If employers paid higher than substandard wages, Americans (who famously do almost anything for money, including eating worms, shooting themselves from cannons, and listening to Barbra Streisand sing) would take these jobs.

Because of their humanity, culture, and language, the workers and their families who cross the borders are far more influential than even the destabilizing flow of goods from China. Thus, the question of how much to relieve wage pressure by the importation of labor should be put to the country unadorned and in its simplest form: To what extent is economic advantage sufficient to justify the consequences of the evolving common-law marriage with the countries and cultures of Latin America? If this is decided merely parochially as a test of strength among business, labor, and ethnic lobbies, there will be no policy, no borders, no justice, and no relief. For it is a great question, to which the answer must be given by the whole people. 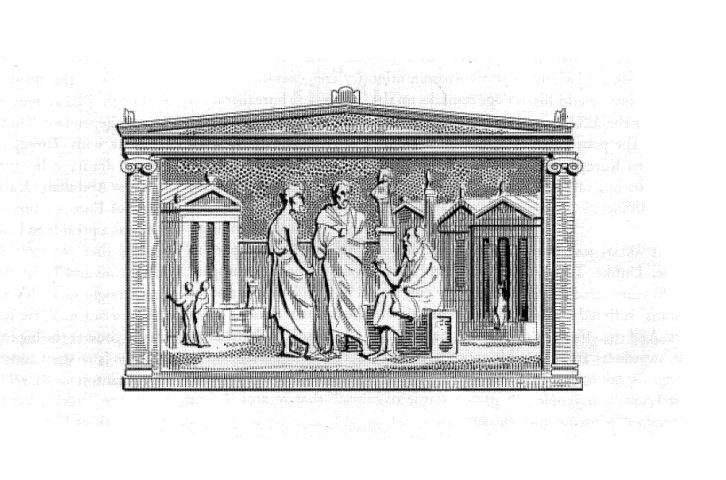 by Peter S. Onuf
The Founding Fathers or the radical "unknowns" of the American Revolution? by Peter Berkowitz
Liberalism and the life of John Stuart Mill.
View this issue